You might know him as the suave actor who plays "The Most Interesting Man in the World" in the wildly popular Dos Equis beer commercials. But behind this carefully crafted image is a regular joe named Jonathan Goldsmith. And, just like most fantasy baseball managers, he's struggling to figure out what went wrong with his team this season.

"It's frustrating," says Goldsmith. "My team got out of the gates fine, but then we started to slump. I made things worse with some moves that backfired, and then the injuries started to pile up. By August I wasn't running a fantasy team, I was running a MASH unit."

Goldsmith's team, The Two-Bit Actors, is currently running 8th in the 12-team Beer Guys League. It's his 14th season playing fantasy baseball, with his best finish being fifth place all the way back in 1998. "It's hard to believe that after all these years I'm still trying to recreate the magic of that 1998 season when I finished fifth," admits Goldsmith. "Although, in fairness, our league only had 6 teams that season -- and one of them was run by the Budweiser Frogs."

So who is winning the Beer Guys League this season? Goldsmith bristles at the question. "Oh, it's one of those Miller Lite bartender chicks," he says with the wave of a hand. "Turns out she's not just hot, she's also smart. And too cool for school. I tried to get her phone number, but she told me point blank that she prefers athletes." 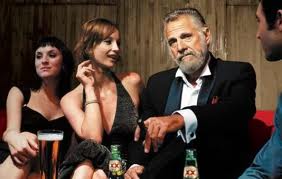 Pictured above: Goldsmith gets scolded by a colleague. "Uh, Jonathan, you do realize you can't smoke that filthy thing in here, right?"
Looking ahead to next season, Goldsmith is already getting excited. He vows not to repeat the mistake he made back in June when he traded away Jose Bautista for Stephen Strasburg. In fact, he likes the idea of taking Bautista in the first round. "I wouldn't pass up on 50 home runs a second time, would you?"
When asked if he could say something interesting about fantasy baseball just like his character in the Dos Equis commercials, Goldsmith thought for an uncomfortable seven seconds before finally admitting that he'd need someone from the ad agency to write the line. He then declined further comment.


Stay thirsty for first, my friend.
Posted by Greg McConnell at 9:15 PM 2 comments:

During a game last week Javier Vazquez hit three batters in a row. That's only the eighth time it's happened in major league history. The last time a pitcher hit three batters in a row was in 2004. Can you name that pitcher? (Hint: He broke into the bigs with the Tigers in 1999, won a World Series with the Cardinals in 2006, and pitched a little bit this season for the Dodgers--the same team he was pitching for back in 2004.)
Posted by Greg McConnell at 4:30 AM 5 comments:

Troy Tulowitzki has already hit 15 homers this September. Back in 1937, Detroit's Rudy York set the AL record for most homers in a month with 18. The NL (and major league) record for most homers in a month was set much more recently than 1937. Can you name the player who holds this record? (Hint: This player hit 20 homers in one June to remember. He is no longer playing in the MLB, but he's still alive.)
Posted by Greg McConnell at 4:30 AM 3 comments:

There was a scary moment today during the Cubs-Marlins game. While running down the third base line, Tyler Colvin was stabbed in the chest by a flying broken bat.

If the bat had stabbed Tyler Colvin in his jugular, then he might not have made it off the field alive. That bat was also  rather close to his eyes.

The bat in question was made of maple wood, which is more likely to splinter than an ash bat. I did some digging online and found this Yahoo sports article, "Baseball at breaking point over maple bats," written by Jeff Passan a while back. It starts:

Someone’s going to die at a baseball stadium soon.

Might be a player. Could be an umpire. Possibly even a fan.

It almost was a coach.

The scar on Don Long’s left cheek still puffs around the edges, fresh enough that it looks like a misplaced zipper instead of the mark of someone who lived too hard. Like every scar, this one has a story, and it involves a piece of shattered wood, about two pounds heavy, that tomahawked 30 feet before slicing through his face.


So when in 2006 MLB broached the issue of maple bats during the collective-bargaining negotiations, it did not go well. The union wasn’t receptive to a unilateral ban and didn’t budge at the thought of at least imposing specifications to lessen the likelihood of breakage.

Here's hoping the MLB bans maple bats before they injure another person.

UPDATE 9/20: As of this writing, MLB continues to let maple bats be used, but they have shut down every YouTube video of this incident. Glad to see MLB has their priorities in order.
Posted by Greg McConnell at 11:31 PM 2 comments:

In honor of Book Blogger Appreciation Week, I figured it was time to write a book review here. Pauly has recommended Fantasyland

to me a few times, and I finally read it this past April. 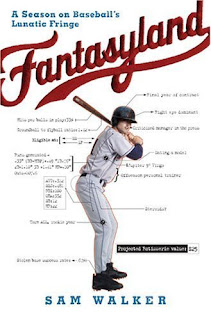 Sam Walker's Fantasyland traces his first season playing fantasy baseball. As a senior sportswriter for the Wall Street Journal, Walker had been reluctant to take any interest in fantasy baseball for the longest time. But when he finally decided to play, he was going all in. He managed to pull some strings and found himself in the unique position of being completely new to fantasy baseball, yet playing in the most competitive league on the planet: Tout Wars.

While Walker was a fantasy baseball newbie, he was by no means new to baseball. In fact, with his media credentials for inside access and sources throughout the MLB, Walker was a bona fide baseball expert. The trick would be to parlay that traditional baseball knowledge into fantasy baseball success. As this book illustrates, that's no easy task. But Walker wasn't going down without a fight. He turned fantasy baseball into his full-time job and hired two employees--an intern who researched players' personal traits and a NASA scientist who wrote a computer program to crunch all the stats. Together, the three of them embarked on a season-long journey that was often humorous, sometimes maddening, even thrilling, but never dull.

Fantasyland is a funny book, with one of my favorite parts being when Walker goes into the locker room mid-season and informs Doug Mientkiewicz that he's planning to trade him off his fantasy team; and Mientkiewicz agrees with that plan. If that's not laugh-out-loud humor, I don't know what is. But this book is more than just a comedy. Walker explores the colliding worlds of old school baseball men and new school baseball geeks. He also takes an in-depth look at each of his competitors in Tout Wars. Some of the stories are reflective, others light-hearted, and one is very poignant. Also, from an interesting historical perspective, Matthew Berry was one of the competitors in this league; and this book was written before he became ESPN's "The Talented Mr. Roto."

This week, September 13 to 17, is Book Blogger Appreciation Week. I know, that was news to me as well. However, that won't stop me from trying to join in on the fun. If you'd like to see what some bloggers are doing for this annual event, here's a few places to check out:

Her Book Self - This book blog is run by Lisa Guerrero, who also stops in here at My Baseball Fantasy from time to time. (And she's a die-hard Cubs fan. Sorry, Lisa, I just lost the Cardinal and White Sox vote for you.) In any case, seriously, her book blog is the real deal.

Behind the Curtain - This is my other blog where I wander into the literary wilderness of books, writing, and randomness. But there's nothing random about this week. I got to interview a talented blogger at "Hair In My Coffee." You can read the interview here.

MLB Trivia: Triple Crown Minus One

An MLB hitter is considered to have won the Triple Crown if he leads his league in batting average, home runs, and runs batted in. While Carlos Gonzalez, Albert Pujols, and Joey Votto have all been considered Triple Crown threats this month, it's possible that none of them will even win two of the three categories. Can you name the last major league player to win two of his league's three Triple Crown categories? (Hint #1: He led his league in homers and RBIs, although technically he tied for the lead in one of those categories. Hint #2: Albert Pujols has yet to lead his league in RBIs.)
Posted by Greg McConnell at 4:30 AM 1 comment: