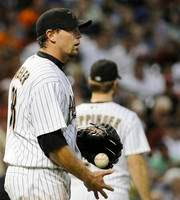 Houston, we have a baseball problem. The Astros' baseball mission hasn't exactly gone as planned this season. Their manager Cecil Cooper didn't have a safe landing, and on Friday their starter Brian Moehler got blasted to the tune of 8 hits and 7 earned runs in just 2.1 innings pitched.

How good will Stephen Strasburg be? The Mark Prior comparisons seem fair. Prior went 6-6/3.32 ERA/1.17 WHIP/11.3 K/9 in his first season; and then 18-6/2.43 ERA/1.10 WHIP/ 10.4 K/9 in his second season. Wins and losses are inherently difficult to predict, but I'd guess that while Strasburg's strikeout totals might be similar to Prior's, I'd be surprised if his ERA and WHIP are as good as Prior's in those first two years.

I'm sure he loves it when you call him Big Papi. After starting out the year in a horrible slump, dogged by steroids allegations, and eventually benched, David Ortiz is on the comeback trail. After basically doing nothing the first 2 months, he could still end up with another 30 HR/100 RBI season. Color me surprised.

Ichi-jected! Up there with Albert Pujols among the greatest players of all time, yesterday Ichiro Suzuki achieved another milestone in his career: His first ejection. Way to show the fire in the belly!
Posted by Greg McConnell at 12:07 PM No comments: