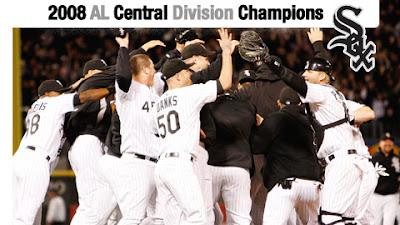 Yeah, I'm glad that the Sox won tonight. But even better, it's how they did it. What a game. A total team effort.

And one other thing. Back when the Sox first traded for Ken Griffey Jr., I was curious as to how things would play out. I didn't expect him to bat .290 and play a Gold Glove center field, but I was hoping that he could at least contribute--and maybe even make a difference in a big game.

Griffey's numbers haven't been great, and he doesn't play center the way he used to. But it's been enjoyable to see him have fun playing for the Sox these past few months; and, oh by the way, he did help make the difference tonight. 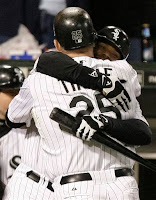 Posted by Greg McConnell at 10:48 PM No comments:

Earlier this year I noticed a new feature in ESPN's MLB standings. In the last few columns they started showing what appeared to be percentages showing the likelihood that the team would win their division, the wild card, or make the playoffs in general. Today I finally checked out what these Coolstandings mean.

And for what it's worth, back on July 5th Coolstandings had these five teams as the most likely to finish the season in the playoffs:


I imagine many baseball fans have already read about Coolstandings, but if you haven't, then you might be interested in checking it out.
Posted by Greg McConnell at 1:46 PM No comments:

I didn't make it to a Cubs or Sox game this season. However, I've been thinking back to the Cubs game I attended last year in July. It was an exciting game and the Cubs beat the Astros by a run. At the end of the game, though, something happened that seemed surprisingly natural, yet disturbingly unfamiliar.

Everyone in Wrigley was singing, "Go Cubs Go."

It seemed natural in the sense that everyone knew the routine, belting out the song in a celebratory bliss. For those who don't know the lyrics, the chorus goes like this:

Granted, it seemed like a safe song to play AFTER a win, although maybe a bit sappy. However, it was a catchy tune and I still distinctly remember the crowd being happy, singing and watching as their players in the home whites and Cubbie blue looked alive, giving high fives all around on the bright green diamond.

But what bothered me was that I had never heard the song before. Yes, this proves I'm not the biggest Cub fan in the world, but still, had I been living under a rock? Where did this song come from? Had I heard it before, only to have forgotten?

I asked a few of my friends who also were at the game, and the answers I got varied. Some were indifferent to the question, whereas others had insisted they had heard it at the end of games before. At that point I dropped the issue.

Until a few months ago.

Late at night I was listening to some sports radio which, if it's not a game that time of night, is usually brutal. Some host whom I likely feel sorry for is trying to keep things interesting while begging for phone calls before each commercial break. Of course, once somebody calls in, it tends to be some idiot asking why Lou Piniella doesn't drop a slumping Derrek Lee down to the six hole or what Kenny Williams could get in return by trading a slumping Jim Thome. My favorites are when little league coaches explain how certain advice they gave their kids worked wonders, and it's that same advice this pro team needs to hear. (I know, I know, I'm complicit in this stupidity for listening.)

But one night somebody called in to ask the host, "When did they start playing that Go Cubs Go song after Cubs' wins?"

In all my years of listening to sports talk radio, I've never heard a more interesting question. So I stopped whatever it was I was doing, and I listened very carefully for the host's answer.

And his answer was: "You know, I've been wondering the same thing."

Seeing an opportunity to salvage his show for the night, the host then encouraged people to call in with the answer. And call they did.

The first guy claimed that it started this year (2008). However, even I knew that was wrong, because I had heard it with my own ears in July 2007.

So the next caller came in and he had a different story, and so did the next. There were many different opinions, but finally a trend started to appear.

One of the callers said the song was actually fairly old, possibly dating to the 1980's, and several callers verified that the song had often been blared in the streets near Wrigley during the 2003 playoffs. After that, things became a bit murkier. But one guy claimed that he was a season ticket holder, and he knew that the song really started to gain traction as the tune to be played in Wrigley after a Cubs' win shortly after the Carlo Zambrano vs. Michael Barrett fight last year. According to this Cub fan, it was during a Cubs' hot streak last July when this tradition started to form.

Which, as it turns out, is the same month that I first heard the song.

Before there was a Steve Bartman, there was a Steve Goodman. Back in 1981, just in his early 30's, Steve Goodman had already been living with leukemia for more than a decade. He was a lifelong Cubs' fan and, back in those days, the Cubs really sucked. They hadn't been over .500 in nearly a decade, and in 1980 they lost over 60% of their games while finishing dead last. So Goodman, a (2-time Grammy-winning) singer and songwriter facing terminal cancer, decided that it was finally time to tell it like it was. He wrote a song called "A Dying Cub Fan's Last Request." While the lyrics spoke of a person who loved the Cubs, they also spoke honestly (and humorously) about the ineptitude of that same team. Here's an excerpt:

When I was a boy, they were my pride and joy
But now they only bring fatigue
To the home of the brave, the land of the free
And the doormat of the National League

His voice was pretty good, his words poetic, and Goodman's song started to get a lot of attention. But one person hated the song: the new Cubs' general manager, Dallas Green. At the time, the Cubs were trying to ditch the "lovable loser" label. They wanted to be about winning, and Dallas Green didn't like the idea of Cubs' fans embracing this song. Reportedly, Green even said that Steve Goodman was no fan of the Cubs.

Before the 1984 season, Dan Fabian, program director and head of promotions for WGN radio, set out to find a new opening theme for the Cubs' radio broadcasts. His first thought was to get Jimmy Buffett, a Cubs' fan, to re-do "Margaritaville" as "Wrigleyville." But then he heard an interview with Steve Goodman, and he had a new idea...

Goodman agreed to Fabian's request, and that's when the song "Go Cubs Go" was born. Here's an excerpt from a Chicago Tribune article talking about the song's creation:

Among the backup vocalists on the refrain are former players Gary Matthews, Thad Bosley, Jay Johnstone, Jody Davis and Keith Moreland -- dubbed "The Chicago Cubs Chorus" on the label.
Moreland, at it happens, shows up in the lyrics of Goodman's other notable baseball song, "A Dying Cub Fan's Last Request," dropping a "routine fly" at the "ivy-covered burial ground."

As it turned out, the Cubs finally started winning again in 1984, the first season that "Go Cubs Go" opened up the radio broadcasts. While the Cubs did go on to win the National League East Division that season, Goodman died just a few days before it actually happened. During Goodman's 36 years, he never saw the Cubs even make the playoffs.

After 1984, the Cubs started to taper off again, and finally in 1988 "Go Cubs Go" was replaced by a Beach Boys song ("Here Come The Cubs"). Although, "Go Cubs Go" was still occasionally played at Wrigley.

It wasn't until last July, nearly 20 years after it had been replaced on the radio broadcasts, that "Go Cubs Go" became a permanent fixture at Wrigley Field after Cubs' victories.

Speaking of Cubs' victories, they clinched a playoff spot today. It also happens to be exactly 24 years after Steve Goodman's passing.

And you know what? Goodman's "Go Cubs Go" song is as popular - and true - as ever.

Posted by Greg McConnell at 9:16 PM No comments:

For a while there it seemed like 2nd place was in reach, but that's a tall order now:

My latest indignity, aside from being 15 minutes late in putting James Shields into my starting lineup, was Chris Young's near perfect game yesterday (one week after I finally dropped him).

Making matters worse, rumor has it that C-Lauff (IamJabrone) is getting ready to post a rap video he cut while in Maui, supposedly titled, "Got First Place," where he's ripped off the melody to Lil' Wayne's "Got Money." C-Lauff's allegedly all over the place, from frolicking on sandy beaches and splashing in the ocean, to sitting in night club jacuzzis surrounded by bikini-clad bunnies, all while iced out, sipping champagne, bragging about his fantasy baseball extravagances while still getting in his personal shots at all of his UPL haters.

I personally won't be watching that.

Oh well, I guess now that the writing is on the wall, it's time for me to join in that time-honored tradition most of us have this time of year in the UPL Baseball: Start colluding to do everything possible to prevent Roland from winning.

Hmm... who would Roland like to pick up from that waiver wire next?
Posted by Greg McConnell at 9:03 PM No comments:

Labels: With so much drama in the UPL...
Newer Posts Older Posts Home
Subscribe to: Posts (Atom)