'Tis the season for giving

In the spirit of Christmas, I figured that it was time to give a gift on this blog. But not just any gift. Yes, you guessed it… it’s time for another prestigious award.

I usually steer clear of politics on this blog, so please forgive me as I give a brief background for this award. Back in 2007, Senator Hillary Rodham Clinton launched her campaign to become the first woman elected President of the . She began her campaign letting the voters in our great country know that she wanted to have a “conversation” with us. She wanted us, as Americans, to explore ideas together and have an open and honest dialogue.

While Senator Clinton’s campaign for president ultimately fell short, her conversation continues to this day. Last month, President-elect Barack Obama nominated to be U.S. Secretary of State where she will be able to continue this conversation all around the globe.

The My Baseball Fantasy blog recognizes Senator Hillary Clinton as our country’s soon-to-be top diplomat who, above all else, is committed to the conversation and just so happens to be a lifelong Yankees fan, too. For these reasons, and others, I am proud to unveil the most prestigious award this blog has ever bestowed upon a reader: “The Hillary Clinton Conversation Award.”

The “Hillary Clinton Conversation Award” (or “Hillary” for short) goes to reader who, over the course of the year, adds the most to the baseball conversation on this blog. While this award favors quality over quantity, a poster’s entire body of work (for that year) is considered.Deciding who would win the Hillary this year was an extremely difficult task. Having never done this before, I first tried various subjective methods to calculate points and kept getting a different winner each time. As such, I was essentially stuck with a four-way tie. With it being Christmas and all, I thought that would actually be a nice story—just give the first-ever Hillary to all four of my readers. But then I thought, “No, this award needs to have some integrity.”So how to break the tie? Just when all seemed hopeless, I remembered a post of mine from late July. It was titled, “What if?” In it, I pondered what a regular MLB fan should do if they just so happened to be in the dugout when a bench-clearing brawl breaks out. I was careful not to say too much in the post, because I wanted to see how readers would connect the dots on their own. In reality, the situation I described in the “What if” post gives the reader only two choices: Stay in the dugout and break from the brotherhood—a dishonor so disgraceful that your entire experience would be wrecked; or save face and go out there and get your butt totally kicked in.Now some people might say, “I’ll go out there and really hold my own!” Well, not so fast. First off, remember that you’re a regular fan. MLB players are professional athletes, and regular fans are not. Even the journeymen are professional athletes. Just because a guy has a .216 batting average or a 6.83 ERA doesn’t mean you could “hold your own” with them in a fight. You’d get your ass kicked. Badly.

On the other hand, others might say, "I'd just stay in the dugout." Well, okay, you'd only be breaking the most sacred of unwritten sports rules: Protect your teammates.So as I’m pondering this dilemma, a possible (albeit ugly) solution does come to mind. During these bench-clearing brawls, it’s not just MLB players who join the melee. It’s coaches, too; and some of those guys are really getting up there in years. I then remembered the time a few years back when Don Zimmer charged Pedro Martinez who, in self defense, pushed an already stumbling Zimmer down to the ground. ( caught hell for that in the media, but I honestly always thought Zimmer was lucky that nothing worse happened to him.) In any case, as I was writing the “What if” post I thought to myself, “Well, if I were ever in one of those brawls, my best bet would be to find a guy like Zimmer…” 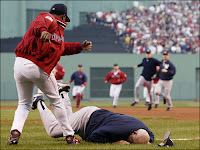 I finished my post by posing this question to the readers: “My question to you, the regular fan sitting in the dugout, is this: What would you do and why?”

Lo and behold, Chairman Gau gave a concise answer that still managed to touch on all of the major themes that I had been considering. Here are his golden words verbatim:

“I think that I go out there, swinging, and go down in infamy. Maybe go find Don Zimmer or some other old dude.”

So Chairman Gau, with your countless insights into the game of baseball, off-color humor, and willingness to admit that in an MLB brawl your best shot at respectability would be to find Don Zimmer, you have contributed to the conversation on this blog more than any of the other six billion people on this planet. As such, My Baseball Fantasy proudly presents you with "The 2008 Hillary Clinton Conversation Award."